Skip to content
HomeScholastica, Benedict, Mary, Martha and Me

On this feast of St. Scholastica, Father M. read the Gospel story of Martha and Mary, then began his homily with the familiar story about St. Scholastica’s prayer to prolong her brother’s visit–which was answered with a storm so severe that St. Benedict was unable to depart. 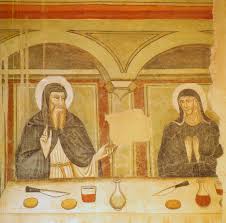 Father mentioned that Benedict was concerned about following the rules–under the Rule he himself had written–and wanted to end the visit in time to return to the monastery by nightfall. Scholastica, on the other hand, wanted to savor the time of prayer and conversation with her brother, and wanted him to stay. When he refused, she took the matter straight to the top. Benedict realized that the storm was no coincidence, and when he called her on it, she replied, “I asked a favor of you, and you refused. I asked a favor of God, and he granted it.”

Father went on to preach about the Gospel. It’s one of my favorite passages–even more so after what was said today. First, he said that it’s not a bad thing, in and of itself, to be concerned about serving a meal. That’s a great comfort to me, as I’m all about serving meals. But here’s the best part:  Jesus wasn’t chiding Martha because she was working on serving a meal to her guests. He was chiding her because she didn’t take into account Whom she was serving.

Guilty as charged. Every single time.

I guess that’s why I have a soft spot for Martha.

St. Benedict, in his efforts to stay true to his Rule, forgot whom he was serving during his visit with his sister. It took her prayer and God’s answer in the form of a thunderstorm to show him that his sister, like Mary of Bethany, had “chosen the better part.”

Lebanese Lamb and Rice for Two