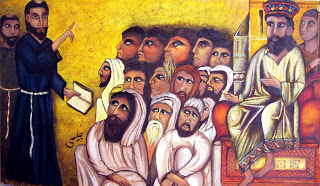 As the minister of my local Secular Franciscan fraternity, I don’t make decisions in a vacuum, but there are decisions that I have to be the one to make.  When decisions are made, the good of the whole fraternity must be considered–it’s like being a parent in that way (except that in my fraternity, I’m actually the “baby” of the family!)

One of our members has brought up again and again that she wants to invite a Muslim to speak to our fraternity as part of our ongoing formation.  She has not really answered the question of what topic she would want a Muslim to speak about.  She has no particular Muslim in mind–she’s thinking of cold-calling a local mosque to invite someone.

I know that this member is concerned that all Muslims are being painted with a broad brush as a result of 9/11 and the War on Terror.  I know that she is convinced that, as Franciscans, we are to be peacemakers.  And I know that she is aware that St. Francis himself met with the Sultan during one of the Crusades.

But there are a few things that I don’t believe she knows.  When St. Francis met with the Sultan, he fully expected to become a martyr as a result of that meeting.  While he did not consider the Sultan his “enemy,” he had no illusions about what would probably happen to him–even though that did not turn out to be the case.  He was not insulting toward the Sultan’s faith, but neither did he pull any punches about his own faith and that he hoped to lead the Sultan to the right way to God.   He saw the Sultan as his brother, but he also saw an opportunity to attempt a conversion.

Someone once called me “practical,” which at times seems at odds with what it means to be a Franciscan.  St. Francis was, usually, anything but practical.  Yet I worry that this member’s proposal would not be for the good of the fraternity.  With no particular speaker or topic in mind, that opens the door to who-knows-what–IF she could even get someone to agree to attend the meeting.  And as no one in the fraternity has any relationships with any Muslims, we do not know if the random person she finds to ask is truly faithful to Muslim spirituality.

And, frankly, this might sound a little insular or provincial or whatever, but I believe that there is plenty for us to learn and discover and by which to be inspired right here within our own Faith.  We don’t need to look outside our own yard for more traditions, more rituals, more ways to prayer.  There’s plenty right here that we have yet to get to know.

This is going to come up again tomorrow at the meeting–I’d love to hear someone else’s thoughts!

5 thoughts on “The Sultan and the Dilemma”