Today we celebrate Bl. Junípero Serra, a favorite of mine ever since I learned about him in grade school. He’ll be named a saint in only a few short months, during the World Meeting of Families in Philadelphia!

Ironically, we’re celebrating a Franciscan saint-to-be on the very first day since 1936 that my parish has not been served by Franciscan friars. We Secular Franciscans are all that’s left here. I’ll be keeping my Franciscan saints (and saints-to-be) close and praying that our new pastor is Franciscan-friendly.

So here’s my post from a year ago, Worth Revisiting:

Today the Church celebrates a priest I first learned about in grade school.

(I’m pretty sure that would never happen today.) 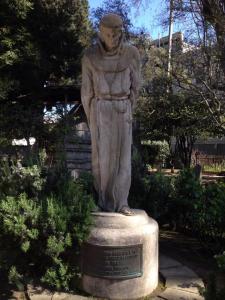 But back in second grade in 1972, our Social Studies book had a whole section on the California missionaries, led by Father Junípero Serra.

Here were pictures, in my schoolbook, of men dressed like my uncle, who is a Franciscan friar. Here was the story of a priest who founded a string of Catholic churches throughout what later became the state of California at the same time the American Revolution was being fought in the eastern part of our nation.

In the Catholic middle school I attended, I learned about Father Serra again;

this time the lesson was brought to us by speakers from the Serra Club, a group that promotes vocations to the priesthood and religious life.

As an adult, when I had the chance to visit California with Hubs in 1995, I made sure to see one of the mission churches there.

I’d love to take a trip along El Camino Real and see them all. They’re beautiful tributes to evangelization.

I’m linking up at Worth Revisiting, hosted by Reconciled to You and Theology is a Verb.