Skip to content
HomeSmall Success Thursday with a Latte on Top

What’s the best thing about Thursday? It’s Small Success Day at CatholicMom.com! Feel like you haven’t accomplished anything this week? You probably have–and those small things do add up. There’s only one rule:  no beating up on yourself over what you didn’t get done. 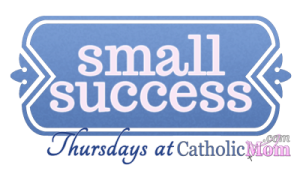 I signed up for the FREE Catholic Writers’ Guild Online Conference, to be held in March at a computer near you. It was wonderful, this summer, to meet so many authors at the in-person conference, and I look forward to the learning and encouragement that I know will happen. I’m hoping this will give me the kick-start I need to get busy, once again, on that book idea.

I braved the snowy roads yesterday and showed up on time for my dentist appointment. The dentist, however, did not. Doesn’t he know what kind of mental preparation it takes for me to steel myself up to go sit in a chair and have someone come at my mouth with pointy metal objects (some of which make horrible noises)? Yes, I consider it a success that I got there at all.

I also firmly believe that since I showed up and the dentist didn’t, I am hereby exempt from all future dental work. It’s only right.

Here’s the obligatory shot of the yardstick I used to measure the snow yesterday:

10 inches even. That’s after it “settled,” according to TheDad (AKA TheMeteorologist.) We probably had over 13.

I’ve invented another homemade latte. This time it’s a copycat of Starbucks’ Cinnamon Dolce Latte. Use a 12-ounce mug to make this drink:

Heat 1/4 cup (2 ounces) of milk in the microwave for about 45 seconds. Froth with a mini-frother at least 1 minute. Pour 6 ounces of coffee into the frothed milk. Add sugar to taste, sprinkle 1/8 tsp of cinnamon on top, and stir.

I’m a big fan of Penzeys Cinnamon for this drink, and they didn’t even have to pay me to say it! (They have very high-quality spices at a reasonable price. Don’t think that because they’re a specialty company that they charge a premium for their spices.) This cinnamon is a blend of 4 types of cinnamon–yes, there are several different kinds, and yes, they do taste different!

Join the party over at CatholicMom.com and share your own small successes. No blog? No problem–add yours in the comments box.

5 thoughts on “Small Success Thursday with a Latte on Top”