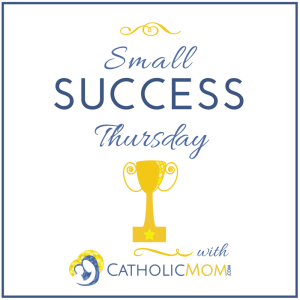 I’ve been working on cleaning out the dumping ground known as The Kid’s Old Room. It’s a tiny space (about 8X10) and I’d love to be able to use it for something other than a place to stuff things that don’t have a home anywhere else.

I began by sorting the books. The Kid had almost our full collection of children’s books in there, so I had to decide what we wanted to keep (because there’s sentimental value) and what we could give away. I wound up boxing up 3 good-size boxes of middle-grade books, which I’ll deliver to the fourth-grade teacher at his school. She used to teach middle school, so she has said that her classroom library could use some beefing up. There’s also a box of books appropriate for younger children, and I’ll ask if one of the first-grade teachers can use those.

On Monday I took a coupon I’d gotten at JC Penney (one of those “cash to spend for later” deals) to use before it expired. I’d wanted to get some capris for myself but didn’t find anything I liked. I did find a nice summer-weight bedspread, which I thought would be a nice change since we only have a very heavy comforter for the bed. The new bedspread was marked down to $40–originally $100. I had a coupon for $30, so it only cost me $10 to get a whole new look for the room.

Then I took my search for capris to a Goodwill store I hadn’t visited before, but which was on my way home from the mall. I tried on a lot of things and came home with 3 pairs of capris and 2 pairs of jeans. I spent only $22; 2 were Levi’s, 1 was Lee and the other 2 items were Chico’s, so I’m satisfied that I got some good-quality stuff. And one of the pairs of jeans looks like someone took off the tags but never even wore the pants.

When I came home I took the same amount of items right out of my closet to put in the donation bag. The least-flattering things were the ones to go!

So this week I have spiffed up my house in 2 ways and my wardrobe in one. Not bad for a $30 investment!